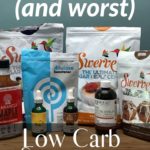 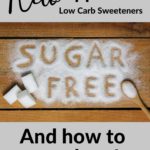 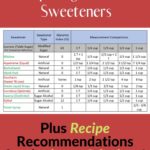 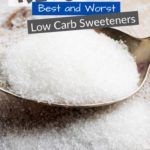 Now let me be clear, this is certainly not an exhaustive list of every keto sweetener that exists. But, it should give you a good jumping off point in your keto approved sweeteners research.

The below low carb sweetener list contains measurement conversions against table sugar along with the pros and cons of each.

Since not all low carb sweeteners are counted equal, I’ve included the Glycemic Impact (GI) numbers for each sweetener so you can see how they measure up against each other.

By the end of this post, my goal is to arm you with useful information, so you are confident in making the best choice for your own Keto diet, healthy eating, and lifestyle!

Let’s get one thing out of the way; The struggle for sweet treats is real, y’all!

While I’m not here to specifically talk about table sugar in this article, it is worth noting that refined sugars exist in everything these days.

Seriously, sugar comes in all shapes, sizes, colors, and flavors, AND some that’s not even found in nature.

One article from Healthline names 56 different names for sugar!!

We clever little humans found novel and imaginative ways to evolve sugars to the point of driving a near-global addiction.

Not quite weaponized but geez, c’mon!

Have you ever fully detoxed from sugar? The withdrawal symptoms are no joke! But that’s for another article ?

Ok, I’m jumping off the soapbox now but let’s all agree that the addiction is real.

Moving on… My little table sugar tirade is over and now we’ve all agreed on a few things.

Sugar is unhealthy and needs to be kicked to the curb and we’ve got some work to do!

There is an ongoing and growing list of low-carb sweetener options.

Some are good. Some are bad.

And while you can swap out table sugar for any of the low carb sweeteners on the list, certain sweeteners work better in some recipes than others.

It’s pretty confusing really so let’s grind through some of the specifics.

I get it. Too many choices sometimes, right?

You might be saying, “I gave up honey in my coffee already and just want to jump on this low-carb healthy-living locomotive without thinking about it.”

Well, news flash! I’m sorry to say it isn’t quite that easy.

Because there are some not so good low carb sweetener choices out there, ya gotta get smart about it.

Take the natural versus artificial debate. Simply put, our bodies are not cut out to effectively deal with artificial ingredients, whereas, we tend to do better with more natural choices.

Why is that you ask?

And of course, more calories IN translates to increased weight or difficulty in losing weight.

I grew up on Diet Coke, and LOVE it…but it’s not doing me any favors in the cravings and weight department.

If you really need a soda, choose a stevia-sweetened brand like Zevia.

With that in mind, don’t believe for one minute that natural low-carb, keto-approved sweeteners let you off the hook completely!

In some Keto circles, such as Common Sense Keto, it’s believed that ANY additional sweeteners (natural and artificial) can cause our needy little bodies to want more.

So, what’s the lesson here? Naturally (see what I did there), we want some sweet treats in moderation, and the best approach is to use minimal amounts of natural sweetener to satiate those cravings.

Ever wonder how all those low carb Sweeteners measure up to table sugar and one another?

Here is the low carb sweetener chart I promised which includes the best keto-approved sweeteners I extensively use (green), and those sweeteners I actively avoid (red).

You’ll notice I AVOID all artificial sweeteners, but there is even a “natural” sweetener I avoid which I’ll explain in a minute.

So Many Low Carb Sweetener to Choose From!

Now you are asking the questions, “why do I use what I use and avoid what I avoid?”

That is a great question and I was thinking you may be curious, so here ya go.

Below is a little Pros and Cons list for each of the sweeteners above (Excluding table sugar of course because you’re already keto-smart and know why we avoid that one ?)

Low Carb Sweeteners I Personally Use

You’ll notice most of my ice-cream recipes call for Swerve Sweetener, but I plan to update all those recipes very soon.

If you want that wonderfully soft, fresh-scooped texture, then Allulose is the one!

I’ve never had ice cream (homemade or store-bought) that stayed soft enough to scoop after being in the freezer for a day.

BochaSweet is one of my new favorite finds in the world of low-carb sweeteners.

Although I’m not a personal fan of anything “pecan” (I’ve always referred to them as dirty little nuts because they taste like dirt, lol), he was raised on them.

I persevered, however, to find away to give my husband back his favorite pie, and after a few trial and errors (he ate those too!), I discovered the power of the BochaSweet.

Monkfruit is awesome, but I especially enjoy the Lakanto brand Maple Flavored Syrup on pancakes and waffles.

It will change your life! I mean it folks!

Drizzle a serving of Lakanto Syrup (made from monk fruit) on homemade keto pancakes (or waffles) and you will receive an immediate promotion to Queen or King of the castle.

These little drops are packed with flavor and there are many flavors to choose from.

We use stevia liquid drops for a variety of drinks including adding a little flavor boost to our protein shakes on occasion.

Sometimes I even sneak a drop into my coffee when no one is looking… ?

Absolutely the workhorse for our kitchen, Swerve has a permanent place in our pantry for three different variants and I use each one for different purposes.

Looking for that molasses substitute. I’ve got you covered!

The following list includes both natural and artificial, low carb sweeteners. Many people in the keto world choose to use these sweeteners, but we do not, and I’ll explain why.

We have a couple of furr babies in our home and therefore never bring this sugar alcohol into our recipes.

We’ll leave this one for the non-pet owner blogger to delve into.

The issue seems to be a potential for rapid insulin release in pets and we simply want to avoid that.

In addition to the known risk to pets, even though this is a sugar alcohol, it does rank on the GI scale with a whopping 12!! Compared to ZERO, that is a significant difference.

It is not a low carb sweetener I would recommend to diabetics.

Aside from the fact that this is an artificial sweetener, several other considerations keep this one out of our home.

And truth be told, it really doesn’t taste that great. But don’t tell my Granny that, because she still uses it to sweetener her tea!

Too much to talk about with this one. There is a laundry list of unhealthy attributes and negative side effects of sucralose ranging from gastro to respiratory, epidermal to neurological.

It’s heavily processed and the name brand version contains a couple of carb-heavy fillers to boot.

This one is difficult for me. I grew up on Diet Coke and LOVE Diet Coke. But we all know that most zero-calorie soft drinks are sweetened with aspartame, and it’s not good for you.

It’s no secret that aspartame has been incredibly controversial for a long time.

The List for Low Carb Sweeteners is Ever Evolving

So, there you have it, folks! A laundry list of low-carb sweeteners, why they’re good (And some not so good) for your own Keto-approved lifestyle.

I’ve also learned that the more I experiment and investigate these various sweeteners that new ideas and uses pop-up (such as, the allulose for ice cream thing that was a game-changer for our Family Movie Nights.)

Seriously, talk about a moment of nirvana for our family! The trial and error is fun but too much can get old so I’ll continue to do as much as I can to save you the trouble.

Be sure to check out some of these sweeteners with my recipes and let us know what you think in the comments below!

Finally, I’d love to hear what you’ve been doing out there on your own with the various sweeteners in your pantry too!

What about powdered stevia? Is it ok on keto and are the conversions the same?

I don't use it personally, but as long as the only ingredient is stevia extract powder or leaf, you should be fine. The conversion from Stevia Liquid Drops to Stevia Powder should be 1:1, but double-check the label to make sure ;)

Buy me a coffee