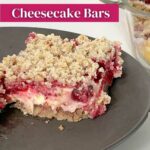 These keto cranberry cheesecake bars are filled with cranberry sauce, orange zest, pecans, and more! They make for the perfect Fall dessert or mid-day snack.

Nothing screams Fall or Thanksgiving like a keto cheesecake loaded with the delicious fall flavors of cranberries, pecans, orange zest, and more! Honestly, what more can ask for? For it to be a special occasion and family hit? I’ll do you one better … It’s all that and more – it’s kid-friendly!

Tis’ the season to gather with friends and family, talk about what we are thankful for, … and eat dessert!

With Thanksgiving being around the corner and holiday dessert on the brain, you are going to want to print out this recipe out and keep it handy.

Keto Cranberry Cheesecake Bars are the perfect dessert or tasty snack for the whole family to enjoy this holiday season! If you are unfamiliar with a “cheesecake bar,” it is everything you know and love about cheesecake, but in a smaller piece topped with delicious pecans.

… Did I mention this cheesecake is keto-friendly? Everyone can indulge without their blood sugar rising.

So, whether you’re looking for desserts to make for the holidays or just looking for a new dessert to try or make, grab the ingredients and bake with me!

For the cheesecake layer:

For the cranberry layer:

For the Crumble layer:

For the ground pecans, simply pulsed pecan halves in the food processor until it was roughly ground up, not super fine. Make sure to not go so long that it makes pecan butter!

1 cup of pecan halves will be ground down to about ¾ cup of pecans, which is what you need for this recipe.

This recipe is perfect for leftover cranberry sauce!

Combine. Combine the butter, almond flour, ground pecans, and low-carb sweetener in a small bowl, then press into the parchment-lined pan.

Bake: Bake the crust for 10-12 minutes, until the edges just start to brown.

For the vanilla cheesecake layer:

Spread. Spread the cheesecake layer evenly over the cooled crust.

For the cranberry layer:

For the pecan crumble:

Pulse. Pulse together the butter, almond flour, pecans, and low-carb sweetener in food until it resembles a crumb-like mixture.

Sprinkle. Sprinkle the crumbs evenly over the cranberry layer.

Bake. Bake for 18-20 minutes until the top is lightly browned.

Yes, cranberries are in fact considered keto and can be enjoyed on a ketogenic diet in moderation.

Fun Fact about cranberries, they are actually 87% – 90% water and have very little carbs and a healthy amount of fiber; making for a great snack by themselves on keto too.

I looked up nutritional facts on cranberries to see how they compared to other berries for the keto diet.

It’s safe to say that you can eat cranberries in moderation just like the rest of the berry family!

Is it OK to Eat Cheesecake on Keto?

Yes, yes, yes! Cheesecake is THE quintessential keto dessert! If you are new to keto, get ready to fall in love with cheesecake – It’s creamy, sweet, and super easy to fit into a low-carb, low-sugar, and keto diet.

Storing keto cranberry cheesecake bars has never been easier! Grab your favorite air-tight container and place them inside. If you have layers, separate them with parchment paper and store them in the fridge. Your keto cheesecake bars will keep for 3 days.

The freezer will keep these bars good for a couple of months. When you’re ready to enjoy again, simply move them to the fridge to thaw out before serving again!

For the Cheesecake Layer:

For the Cranberry Layer:

For the Crumble Layer:

For the Cheesecake Layer:

For the Cranberry Layer:

For the Crumble Layer: