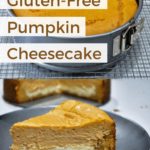 This keto layered pumpkin cheesecake with a cookie crust combines the best of three worlds! Cheesecake, Pumpkin Pie, and Cookies!

After my recipe for Keto Pumpkin Cheesecake Thumbprint Cookies turned out to be wildly popular (2K shares in the first week!!), my husband suggested modifying the recipe and transforming it into a cheesecake.

The man is a kitchen genius when it comes to food creation ideas, and I often question why he isn’t the food blogger instead of me. But I think he’s perfectly happy being the Idea Man and official recipe taster.

With ingredients in hand and a newly purchased springform pan, it was time to bring my husband’s idea to fruition.

For the cookie crust, combine all the ingredients into a large bowl and beat with an electric hand mixer until smooth.

Related: Learn how I won my family over in the keto lifestyle.

Press the cookie dough crust into the bottom of the springform pan and up the sides. The dough is pretty sticky, so I recommend using parchment paper to help flatten out the dough. Once this is done, set aside to prepare the cheesecake layers.

**Update: Next time I make this, I plan to make the cookie layer flat, instead of coming up the sides. I believe it will make for a prettier finished product.

Beat together the cream cheese and powdered Swerve until smooth. Then add in one egg at a time, beating until smooth between each egg.

Transfer about half of the cheesecake mix to the cookie dough crust, spreading evenly.

Add the pumpkin puree and pumpkin pie spice to the remaining cheesecake mix and beat until fully incorporated.

Carefully spread the pumpkin cheesecake mixture over the other cheesecake layer.

Bake at 350 degrees F for 50-70 minutes, until set and the middle barely jiggles. Allow the layered pumpkin cheesecake to cool completely on the counter before transferring to the refrigerator for a minimum of 3 hours. (It’s even better when it sits in the refrigerator overnight)

For the filling, divided:

Do you use a water bath when baking like a traditional cheese cake?

I don't use a water bath. I think that becomes more important when you do a crust-less cheesecake.

Hi, what other flour can be used for this recipe? My daughter is allergic to almonds and this looks yummy to make for thanksgiving.

Hey Millie. I haven't tested any other flours, and coconut flour definitely won't work because it's not a 1:1 conversion. Walnut flour "may" work, but it's untested.

I made this for Thanksgiving and it was SO good! Do you have any plain cheesecake recipes with a similar crust? I really liked the way the crust was thick and went up the sides

Thank you for the clarification, now I'm ready to make the pie.

How many packages of cream cheese are required for this recipe? Also how much pumpkin purée? The amounts listed are a bit confusing.

How many blocks of cream cheese? It says 680.4 ounces?

Buy me a coffee