This post may contain affiliate links, which helps keep this content free. Please read our disclosure for more info. 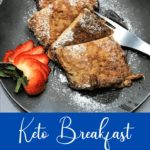 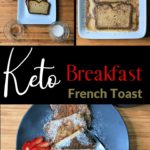 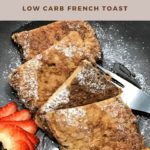 Who says you can’t have your cake and eat it too?! Don’t believe them! My Low Carb French Toast is guaranteed to change your mind.

Not only does this Keto french toast recipe give you something different to do with those scrambled eggs that one month into quarantine you are certainly tired of, but it also gives your taste buds a great exercise in joy and happiness.

Now, while this recipe uses my Keto Yeast Bread as the base, I can’t take the credit here. My husband actually came up with the idea.

Back in our pre-keto days (PreTo’) :), he would go through nearly a loaf of bread in a week and at least a couple times per month french toast made it to the table on the weekends.

Several pieces, piled high, slathered with butter and syrup, and cut diagonally because, well… triangles. You can imagine the calories and the ensuing carb-coma.

So on one recent weekend morning, after a fresh loaf of my keto yeast bread “magically” appeared on our countertop, nostalgia kicked in and he went for it! Voila, enter Low Carb French Toast! All the joy and happiness sans carb coma!

So there are exactly three specialty ingredients you’ll need to do this recipe true justice. While two are completely optional, you’ll thank me for strongly encouraging the use of both ;).

First, as I mentioned previously, my Keto Yeast Bread Recipe is the key. However, as the saying goes, ‘we cannot live on bread alone’.

Enter the Lakanto brand Maple Flavored Syrup and Powdered Sweetener. With these three ingredients, your taste buds are guaranteed to be wowed.

Related: Check out all of my keto breakfast recipes!

For just one or two servings your favorite non-stick skillet will do just fine. However, if you are cooking for a larger group or making plenty for leftovers, the griddle is great!

Ever wondered where French Toast originated?

Nope, me either since it was obviously France, right?!

Apparently, the dish has been traced as far back as the Roman Empire and the name was first used in 17th century England and brought over to the USA by settlers.

Of course, the actual dish has been around for much longer. The French actually did have a version of their own called pain perdu which means lost bread.

What better way to save nearly stale bread than by dipping it in an egg, cinnamon, vanilla, and milk wash then frying it up on the skillet, so – Vive la France!!

You start by whisking together the eggs and almond milk. We use the unsweetened vanilla variety. Add in the ground cinnamon and vanilla extract then mix the wash VERY well because the cinnamon loves to remain high and dry in liquid.

Next, Melt the butter in a non-stick skillet (or griddle) over medium-high heat. While your butter is melting, soak the slices of bread in our egg wash, about 15 seconds each side.

A word of caution here; the longer you soak the bread, the more wash will be absorbed which is great but be careful because the bread may become so soggy it falls apart.

Cook the soaked slices of bread in the non-stick skillet, about 90 seconds each side, or until golden brown.

Serve with your favorite low-carb syrup and sprinkle with Swerve Powdered Sweetener.

So that is about it folks. My husband, for some reason, is insistent that you be sure to cut into triangle pieces before serving, and while I’m sure there is no flavor difference let’s humor him this once.

Another option for on-the-go would be to cut into long strips prior to the egg wash to make your very own french toast sticks.

However you slice it, this recipe is sure to put a smile on your face and your belly and the low carb content means you can do it guilt-free. How’s that for a win-win?

Keto Pigs in a Blanket